After the initial photographers must be aware of the notion of what is meant by "active" and "negative",
these are explained in the following and deciphering. If you have a photo that you originals are shown in front of our eyes,
as the reality is "active" (Positive), however, which of the shadow there,
where the original light and turn on a light shade locations appear
so the image "in the negative" (negative) is called.

Ambrotype: The ambnrotype or amphitype, also known as a collodion positive in the UK, is a positive photograph on glass made by a variant of the wet plate collodion process. Like a print on paper, it is viewed by reflected light. Like the daguerreotype, which it replaced, and like the prints produced by a Polaroid camera, each is a unique original that could only be duplicated by using a camera to copy it.

The ambrotype was introduced in the 1850s. During the 1860s it was superseded by the tintype, a similar photograph on thin black-lacquered iron, hard to distinguish from an ambrotype if under glass. 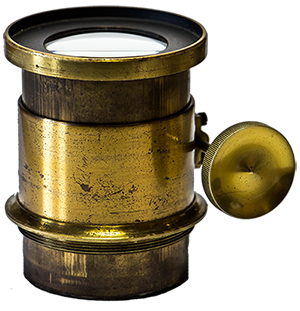 History: The ambrotype was based on the wet plate collodion process invented by Frederick Scott Archer. Ambrotypes were deliberately underexposed negatives made by that process and optimized for viewing as positives instead.[1] In the US, ambrotypes first came into use in the early 1850s. In 1854, James Ambrose Cutting of Boston took out several patents relating to the process. He may be responsible for coining the term "ambrotype".

Ambrotypes were much less expensive to produce than daguerreotypes, the medium that predominated when they were introduced, and did not have the bright mirror-like metallic surface that could make daguerreotypes troublesome to view and which some people disliked. An ambrotype, however, appeared dull and drab when compared with the brilliance of a well-made and properly viewed daguerreotype.

By the late 1850s, the ambrotype was overtaking the daguerreotype in popularity. By the mid-1860s, the ambrotype itself was being replaced by the tintype, a similar image on a sturdy black-lacquered thin iron sheet, as well as by photographic albumen paper prints made from glass plate collodion negatives. 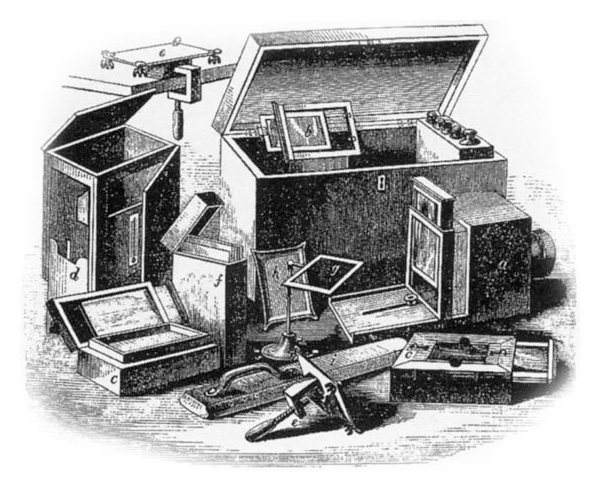 Process: One side of a clean glass plate was coated with a thin layer of iodized collodion, then dipped in a silver nitrate solution. The plate was exposed in the camera while still wet. Exposure times varied from five to sixty seconds or more depending on the brightness of the lighting and the speed of the camera lens.

The plate was then developed and fixed. The resulting negative, when viewed by reflected light against a black background, appears to be a positive image: the clear areas look black, and the exposed, opaque areas appear relatively light. This effect was integrated by backing the plate with black velvet; by taking the picture on a plate made of dark reddish-colored glass (the result was called a ruby ambrotype); or by coating one side of the plate with black varnish. Either the emulsion side or the bare side could be coated: if the bare side was blackened, the thickness of the glass added a sense of depth to the image. In either case, another plate of glass was put over the fragile emulsion side to protect it, and the whole was mounted in a metal frame and kept in a protective case. In some instances the protective glass was cemented directly to the emulsion, generally with a balsam resin. This protected the image well but tended to darken it. Ambrotypes were sometimes hand-tinted; untinted ambrotypes are monochrome, gray or tan in their lightest areas. 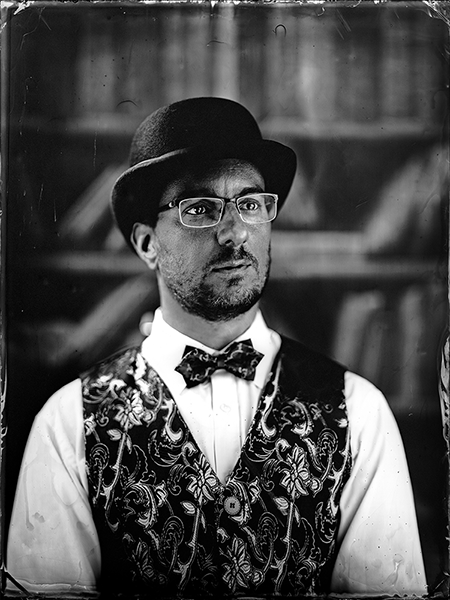